There is an article about the new Naoko Takeuchi interview in ROLa magazine, which will be selling its first-ever issue starting in August 2013.
Below is a translation of this article: http://natalie.mu/comic/news/94024 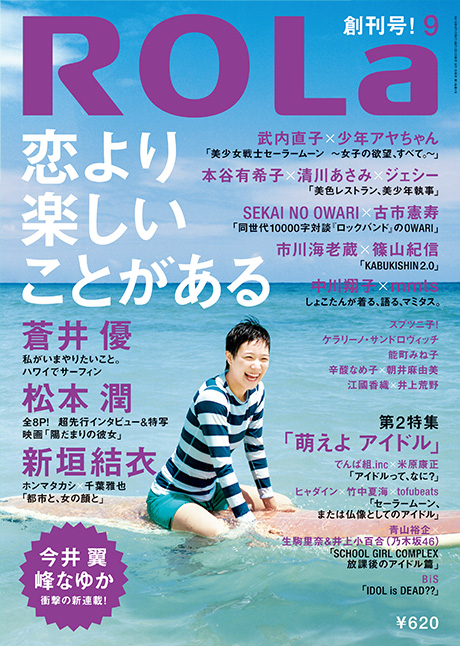 On sale at amazon.co.jp

On sale August 1st, the women’s fashion’s magazine ROLa (Shinchousha Publishing) will be featuring a getting to know you interview with “Pretty Soldier Sailor Moon”‘s Naoko Takeuchi.

Holding the interview is a big Sailor Moon fan, Shounen Aya. The article will feature secret information about the birth of “Sailor Moon”, Naoko’s every-day struggles with her editor, Tuxedo Masks’s unexpected motifs, etc., as well as her favorite episodes. Takeuchi hasn’t done an interview in over 11 years, her last one was back in 2002 in “Figurine King” magazine (World Photo Press), so fans are in eager anticipation of this article.
—

ROLa isn’t published by Kodansha, but by another company that specializes in women’s fashion. This new publication seems like it’ll be similar to Tokyo ViVi, which has been featuring artwork and news regarding the 20th anniversary of Sailor Moon. Naoko Takeuchi has been rather seclusive in recent years, and so it is noteworthy that she is once again talking to media and giving interviews.

(As a side note, I own the issue of Figurine King referenced in the article and will be providing scans of it in the very near future, for anyone who is interested! Naoko Takeuchi gave a great interview in that publication with some very rare photos of herself, and I hope we’ll see something similar to that in the upcoming ROLa magazine article!)

Thanks to @ANN_Lynzee for letting us know about this article!

I have purchased a copy of ROLa magazine, and will be making a full translation of the interview. Look forward to it! :)

Update: This has been translated and can be read here! =D

Leave a Reply to Luke