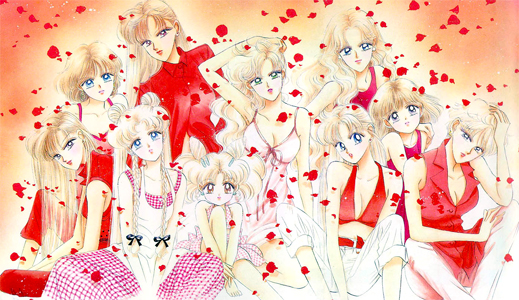 “Sailor Moon” chronicles the transformation of a clumsy 14 year old crybaby named Usagi into a soldier of love and justice. Along the way Sailor Moon meets four other girls her own age who also undergo the same journey to become sailor soldiers for their respective guardian planets; Sailor Mercury, Sailor Mars, Sailor Jupiter, and Sailor Venus. Later, Usagi meets other girls going through a similar transformation – Sailor Saturn, who is around 12 years old, Sailors Uranus and Neptune, who are thought to be between 17 and 18 years old, and Sailor Pluto, who is a university student in her late teens / early 20s. An array of teenaged girls, all of whom fall somewhere along the spectrum of when girls begin to become women…

While the series “Sailor Moon” focuses on the trials and tribulations of girls transforming into magical warriors of justice, another transformation is quietly happening in the lives of each of the characters. The lack of any mention of this physical transformation in a show dedicated to female empowerment and development is puzzling; how can a show like Sailor Moon, which focuses on a team of girls going through puberty, totally ignore the facts of menstruation?

Many feminists will be quick to point out that most of the Sailor Moon series is drawn and animated with the intention of satisfying the male gaze. And the truth is that most men do not find menstruation sexually titillating. Removing all discussion of the facts of female puberty from Sailor Moon makes the series more palatable for men who are into it for the pretty girls and panty shots, and for parents who may find discussion of menstruation with their young daughters uncomfortable.

Given Naoko Takeuchi’s refusal to have her characters conform to the whims of men, and her unusual frankness about her own body, why does Sailor Moon lack discussion of female puberty? We know that Usagi, the series protagonist, has a daughter – a fact that is introduced into the story line fairly early on. Yet no mention is made of Usagi’s experience with puberty, which is especially strange since Usagi is portrayed as accident prone and indiscrete. There is no mention of her pregnancy, and no mention of Usagi’s experience with child birth – all of which Naoko Takeuchi writes about openly and in great detail in her “Punch” series in Young You magazine.

Sailor Moon overall does a great job of empowering women; it gives us a variety of examples of womanhood, all of whom are worthy and admired in their own right. The show taught many girls that it is okay to want a traditional role; Usagi is the protagonist of the show, and although she is strong and competent, she chooses to become a mother and wife. Sailor Moon teaches us that it is okay to be a career woman; you can be like Sailor Mercury and become a doctor, and that is still beautiful and feminine and worthy of respect. You can choose to devote yourself to spirituality like Sailor Mars. You can be strong and tomboyish and still maintain a soft, nurturing side like Sailor Jupiter. You can be bubbly and whimsical like Sailor Venus, but still be a leader and someone to be taken seriously. You can be a female who functions outside gender norms – you can be a lesbian or a trans-woman and still be valued and admired by your peers. More than anything, Sailor Moon showcases women as complex human beings. Their purpose is not to be a side kick, subordinate or ornament to a man. Women are shown as full people in their own right, all of whom are deserving of respect and dignity, and that is why Sailor Moon as a series is vitally important as a source of positive female role models.

As women and girls, I think it is important for us to take notice when media intended for our consumption whitewashes the facts of our biology. In this area Sailor Moon falls short. If Sailor Moon had detailed the experiences of teenaged girls undergoing puberty, or the realities of pregnancy and childbirth as experienced by Usagi, I think that would have been of great value. It could have helped relieve some of the stigma surrounding the female body, which is especially prevalent even in series intended for women. Please share your thoughts on issues of female biology as reflected in Sailor Moon in the comments below – I am curious to hear the thoughts other women have on this subject. Thank you for reading!

10 Responses to “The Invisible Red Thread: Menstruation in Sailor Moon”