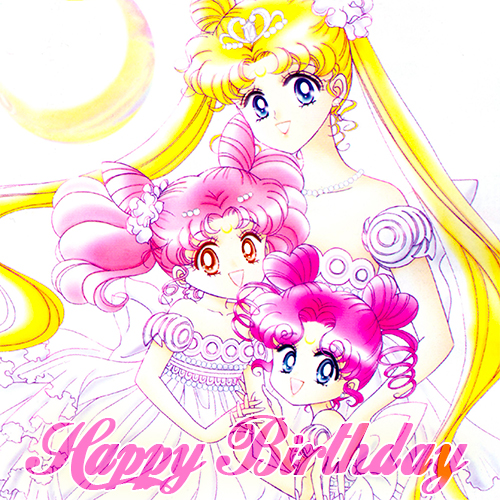 This year we’d like to do a little something special to celebrate the birthday of the star character of Sailor Moon, Usagi herself! And of course we can’t forget about her daughter Chibiusa and (depending on which canon you consult) her alternate future self in disguise, Chibi Chibi!

We’ve put together a collection of some of our media centering around these characters, links to great media on other sites, and quotes from you guys about these characters who have held a special place in all of our hearts for 25+ years.

♥ Pretty Soldier Sailor Moon: Act 1
What better place to start that the world’s first introduction to Usagi? Step back in time with our translation of the very first chapter of Sailor Moon.

♥ Pretty Soldier Sailor Moon: Act 15
Though Chibi Usa makes a brief debut at the end of Act 14, this is was the first true introduction to the character.

♥ Pretty Soldier Sailor Moon: Act 51
Chibi Chibi makes her debut! You can also find some adorable Chibi Chibi art from the beginning of this book in the Shinsoban printing here.

♥ Chibiusa’s Picture Diary
The Chibiusa Picture Diaries are a series of short stories that focus on the adventures of Chibiusa.

♥ Ai wo Shinjiteru Lyrics
Usagi’s character song from the Sailor Stars Arc. Listen to it here!

♥ Sailor Moon in Animage 1993
Featuring an Usagi and Chibiusa birthday celebration on the cover.

♥ Earth Wind Vol. 1
This translated doujinshi is for adults only! If you’re over 18, check out this gorgeous Usagi-centric UsaMamo story drawn by one of Naoko’s assistants Oumori Madoka.

Celebrating Around the Web

♥ Eternal Edition 3 on Sera Myu Antics
This best of Sera Myu album from the Bandai era collected all the best Usagi and Chibiusa songs and even includes some karaoke tracks!

♥ Here We Go! Shinjiru Chikara Lyrcs
Check out Usagi’s theme song from PGSM over at Sailor Music! And grab the audio while you’re there.

We asked you on facebook what these characters meant to you, and the responses were incredible! Usagi in particular has had such a deep impact on us all, she should be celebrated for generations to come.

Usagi is the definition of giving for others happiness. She will constantly give to make someone happy or do what it takes to prove they can be happy or they are good in some way. She never judges by character nor cover when she meets someone knew regardless of it’s just her not paying attention, things flying over her head, or just her belief that everyone has some form of good in them. To me, Usagi means you should always try to give people a chance and always try to make someone smile because you never know when someone may really need that. – Sailor Busters

Usagi saved my life. My 15 year old self was going through a rough time when I found Sailor Moon, and when times got rougher her character was there to lift me up and give me hope. – E.M.

I appreciate that Usagi’s “power of love” was practically literal: she was the first character I was introduced to as a child that was absolutely pansexual. I didn’t have a word for that back in those days, but watching her fall in love with everyone— men, women, non-binary, space aliens, etc and that everyone fell in love with her back pretty much set me up as a kid to recognize that anyone can fall in love with anyone else in this world. I can also appreciate homegirl’s hobbies of snacking and comic books. 🌙 – E.P.

Usagi reminds us that being afraid, that being sensitive, and that loving others is not weakness and can actually give us great strength. To be brave you must be fearful but do something anyways. To have compassion you must be sensitive to others. To love others you must have empathy. She also shows us that you can have personal weaknesses – laziness, excessive fondness for food, sometimes play too many videogames.. and still be a leader in other aspects of your life that people respect, admire, and will follow into battles both literal and metaphorical. Femininity is not weakness. Compassion and mercy are not weaknesses. Her willingness to reach out to Galaxia because she sensed her loneliness and her desire to see beyond the hate in people’s hearts and understand them is something our world needs more of. Thank you Usagi for being a gloriously imperfect and inspirational figure for those of us that are compassionate crybabies who love our friends, fight for what is right, have a determined idealism and hope for humanity and are proud fighters for love and justice. ♡ – C.N.

Usagi showed me that a girl can be a hero in a time where TV only had male superheroes. Sure she doesn’t do her best in school and definitely isn’t the most athletic, but she is able to save the day. Her ability to inspire others and unwavering love for her friends made me want to be a better person. Also, she was legit the only Asian hero out there. Representation matters! – C.A.

I could go on about Usagi and her qualities, but I’ll talk about Chibiusa. She never seems to get enough love from fans and I adore her. So,here comes this little kid who looked like she was 4-5, hard to tell in anime, out of nowhere and basically comes into the story like a scratch on a record. She was annoying and mysterious and people hated her.

Her story arc really is what pulled me in as a fan of the show because it unlike anything I’d seen in animated shows before. Watching her growth as a character, a scared kid coming from a broken world. She was a flawed character. She was trying to find her way and do the right thing but sometimes you get stuck into temptations and go into the wrong direction. Unlike a Usagi, Chibiusa felt more real to me as a person. To me, Usagi, while clumsy and a ditz and clearly an extrovert, didn’t speak to me as a person. I wanted her as a friend for sure, but Chibiusa was different. I understood her as a character.

But it was really her friendship that she had with Hotaru, Sailor Saturn that really showed that she was her mother’s daughter. Hotaru is, and will always be my favorite character from the show. But the friendship she and Chibiusa had was one that stuck with me till this day. Chibiusa had no hesitation in befriending someone who was obviously different and suffering emotionally that had some dark secrets. And in the end Chibiusa almost payed the ultimate price in this friendship. The fact I got all this from a show that I was watching on TV was kind of life changing. – K.D.

Usagi is my role model. Even imperfect as she is, that’s her true beauty. Underneath her image as Sailor Moon/Serenity, she’s just a regular girl, with regular dreams. And she never let anything or anyone corrupt her heart! That’s the most important aspect of what she represents ❤️🌛🌟 – D.P.

love that Usagi always sees the best in everyone. She wants to help the villains, not destroy them. I also love how she genuinely loves all of her friends. And even when she is legitimately scared, she fights for the good of the people because she knows it’s the right thing to do. 💖 – K.W.

Usagi has brought wonderful friends into my life and helped shape my early art years. She taught me that everyone deserves a chance and some people can be brought back from the dark places with a little love. – S.M.

She made me late for school every morning, just like herself..
Totally worth it!! #missedthe90s – M.E.Z.

Sailor Moon opened the door and inspired young woman and men to be whoever they wanted to be & to love however you want to love. She encouraged young girls to fight and be strong. Usagi is and always will be my favorite super hero of all time. Guardian of Love and Justice, for all people! – S.A.

As a child I was very silly, forgetful, clumsy and uncoordinated, and I caught a lot of grief for it. To be honest, I still am all of these things. However, back then, seeing a character possessing these traits accomplish so much and be loved by the people around her… If someone like that could be magical and strong, then maybe I was OK, too. – M.M.

Since no one else mentioned Chibi Chibi, I’ll talk about her! Probably no character varies as much between the different canons as Chibi Chibi. But whether the phrase is specifically used or not, she’s always the Light of Hope. She’s that little voice we all need inside ourselves to remind us not to give up, that our suffering and sacrifices mean something, that there’s a light at the end of the tunnel. We could all use a Chibi Chibi, especially with everything going on in the world now. – Katie

Usagi was the leader and central character, and so many people questioned why. She was in no way the archetype to fill that role. Whereas her friends and compatriots were brimming with traits that society admires in leaders. Athleticism, intelligence, spirituality, style..None of which she strongly conveyed herself. However as we saw the story and her character progress – we realized something. Her own traits, ones often seen as merely “supportive,” were in fact the most important traits of all…

She loved to make people happy. She brought people together; even ones who normally would never have spoken a word to each other. She, herself, could get along with anyone she met. Any gender, any age, any background. Because at her core: she was without pretense. She had some simple and selfish desires, sure, as any healthy human does. Those didn’t dictate who she was at her core. Try as she might to impress people, she knew it mattered far more to make those people smile…

She sacrificed everything for those she cared about, and she wouldn’t want you to feel sorry about that either. She did it because it was right, and because a world without connectivity and empathy is not one worth living in. To quantify her traits on paper, and on first meeting: you’d say she’s simple. Silly. Weak. “Boring,” even. To truly know her, you’d realize she’s the strongest one of all. That her depth, in myriad ways, knows no bounds. She was a catalyst for both the human and the superhuman evolution of the series’ tale…

Usagi was the kind of person I had been like all of my life, and she taught me that I’m okay being that person. The mediator, the great unifier of people, the one who is infallibly optimistic – even when all logic says you shouldn’t be. Someone whose genuine kindness is mistaken for weakness or timidness. Allowing people to sometimes beat you down; to take advantage of you: though you never let it phase you…

Someone who shares their respect, friendship, or even love without asking anything in return. Regardless of someone’s gender, age, race, or backstory. Because real human connection doesn’t have qualifiers or prerequisites. I carry those lessons to this day, I’ve never given up. Every June 30th I wish her a happy birthday. Someone who technically doesn’t even exist: Except… she does exist. She is me. She is you. She is eternal. – J.S.