We had rehearsal all day long again today, so…
I brought tons of bread for everyone!!
Just the young girls(?) were eating, so I was going to invite the ladies in their prime and the staff to come have some… but there was already this huge crowd!

Whoa, they’re swarming! Their eyes and noses were quick! It was all gobbled up in a flash!

The rehearsal ended at 9:30, so now I’m going to Live Cafe Hayase to eat dinner! 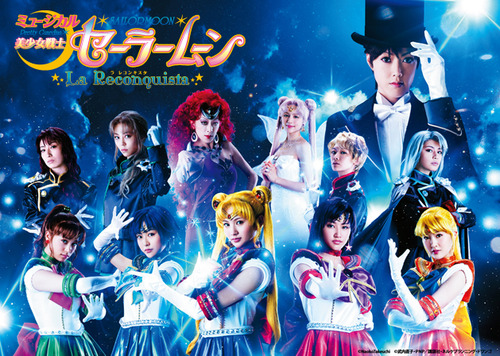 This is kind of a strange feeling!
I’ve played a male villain before…
Maybe Amaterasu? No… that wasn’t a villain, so this is my first time playing a female villain!

Thank you so much once again to everyone who came to see the musical Pretty Soldier Sailor Moon and to those of you who watched it on Nico Live!
The company all got along well, so I enjoyed every day of rehearsals and performance.
Mr. Hiramitsu and everyone from Hajime Staff were incredibly talented so we were able to put together a show that felt great. I’m grateful for that from the bottom my heart.
Every girl knows it Sailor Moon! I love it too! I’m very grateful for the kind fans that came each day and to be a part of a work that has been so widely enjoyed for such a long time.
It’s an honor to be part of such a big name show.
There are lots of pictures I want to post, but for now I only have official permission to post images of Lemures Barbar so here’s the first one.
With Mr. Yuzawa, posing with the vague concept of “Circus Leader and Performer” lol. With his hat and the mop standing in for a cane, he’s doing his best impersonation of a circus leader.
This is my costume for the game show scene where I appear as a companion. The tiny hat is so cute.
If you look at it closely, you can see that my hair is shaped like horns. The hair and makeup artist really focused on the details!
The red glasses are the perfect disguise to make me look human. lol 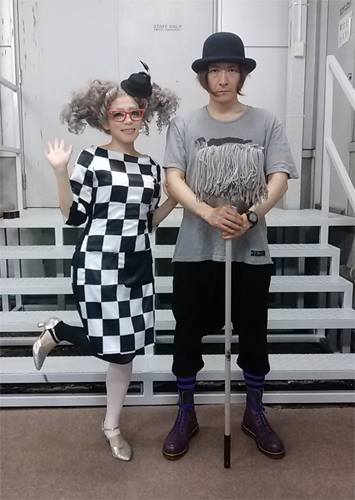