This is a translation of ths page on the Evil Line Records site for the DVD release of La Reconquista. Translation by ainomessage. Formatting by Galadan.

The first musical incarnation of “Pretty Guardian Sailor Moon” was in August 1993. Each year a new musical and its revision were produced and they became so popular that even after the manga and anime ended they gained strength and kept on going for 847 performances until 2005.

The new five guardians, chosen at auditions with creator Naoko Takeuchi as a judge, dazzled the audience with their fresh acting and beautiful appearance. Beginning with Yuga Yamato as Tuxedo Mask, the musical caught attention for casting all male roles with female actresses and La Reconquista went on to be a huge success, finishing after 16 performances.

Now one year later, the “new era” of Sailor Moon Musicals is delivering another new story. This year the musical “Pretty Guardian Sailor Moon” -Petite Étrangère- will cover the Black Moon arc of the manga.

The striking guardians and Tuxedo Mask of last year will be joined by new cast members and will take on a new battle. There’s no doubt you’ll enjoy Petite Étrangère 100 times more if you check out the La Reconquista DVD before heading to the theater! 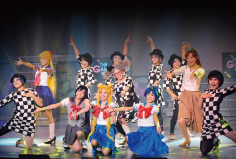 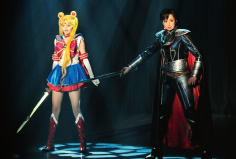 STORY – The story of the “Phantom Silver Crystal”

The musical “Pretty Guardian Sailor Moon” -La Reconquista- deals with the Dark Kingdom arc of the manga. The play begins with the five sailor suited pretty guardians Usagi, Ami, Rei, Makoto, and Minako at a game show event. The five girls receive a popular girls’ game as presents from a new idol group Pandemic 4. It turns out the game sucks the energy out of the humans who play it.

Pandemic 4 are actually the dark Four Generals who serve Queen Beryl. Queen Beryl’s aim is to exact revenge on her enemy from a distant past, “The Moon Princess” and “The Moon Kingdom”, and to be together with her beloved “Endymion.” To achieve her goal she plans to steal the Phantom Silver Crystal from the Sailor Guardians and offer it to Queen Metallia.

For some reason Queen Beryl calls Usagi’s boyfriend Mamoru (Tuxedo Mask) by the name Endymion and then kidnaps him.

Who is Endymion really…? What happened between the Dark Kingdom and the Silver Millenium…? How are Usagi and the Moon Princess connected…? The battle of the Sailor Guardians crosses space and time and is filled with mysteries. This story about the bonds of friendship will surely make anyone weep.

Exciting stories, splendid singing and dancing, a spectacle on stage… there’s no end to the appeal of the Sailor Moon Musicals, but the biggest thrill is seeing the cast in action in front of your eyes.

The biggest thrill comes when the casting is spot on. To see just how spot on the casting was, let’s go through the “points I share in common with my role” listed by the main cast. (Comments taken from the 2013 pamphlet.)

Usagi Tsukino (Sailor Moon)
She transforms into a strong guardian, but normally she’s a clumsy girl.

Points Satomi Ookubo Shares in Common with her Role:
I’m always a little bit of the ditzy type, but I can pull myself together when I need to!

Ami Mizuno (Sailor Mercury)
A genius with an IQ of 300 who dislikes boys.

Points Miyabi Matsuura Shares in Common with her Role:
I look like the type to be easily misunderstood. I have a playful side like she does too!

Points Kanon Nanaki Shares in Common with her Role:
When I was little I loved the way Rei would chant spiritual wards in her miko outfit and I would always imitate her.

Makoto Kino (Sailor Jupiter)
Though she’s strong and a powerful opponent in a fight, she’s actually also talented at cooking and sewing.

Points Yuu Takahashi Shares in Comon with her Role:
Despite my appearance I’m pretty girly and fall in love easily.

Minako Aino (Sailor Venus)
The leader of the Guardians. Actively searching for love.

Points Shiori Sakata Shares in Common with her Role:
I’m cheerful and can sometimes act like a big sister!

Points Yuga Yamato Shares in Common with her Role:
I also love to wear a tuxedo. I also like red roses.

SPECIAL – Learn and Review with this DVD Full of Special Features!

In addition to the play itself, the La Reconquista DVD also includes many special features. An interview about the highlights with Satomi Ookubo and Yuga Yamato, scenes of the Guardians’ promotional activities, behind the scenes of the rehearsals and the play, the curtain calls… In addition, the scenes featuring all five members of Momoiro Clover Z as characters in the girls’ game are also included.

This DVD is not only for those who missed last year’s show, but also a must-see for those who want to watch the show over and over again. Be sure to watch and rewatch La Reconquista to prepare for “Petite Étrangère” this fall. 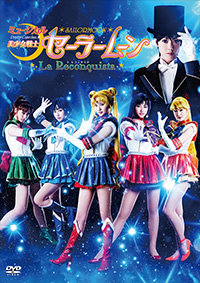 The following comments from Satomi Ookubo and Yuga Yamato are taken from this page.

– Satomi Ookubo (Sailor Moon/Usagi Tsukino) comments
The friendship between the Sailor Guardians.
They have such loving bonds that the word friendship is almost not strong enough. They’re really wonderful friends! I also think you should pay attention to my scenes with Mamo!

– Yuga Yamato (Tuxedo Mask/Mamoru Chiba) comments
It’s the type of musical where the audience and the play become one and enter a dream world together without breaking the world of the anime. Because the entire cast is made up of women, you can see a realistic Tuxedo Mask (Mamoru Chiba) in a different way than when he’s played by a man. You’ll of course enjoy the costumes, but there are also heartwarming scenes between Sailor Moon and the Sailor Guardians that I hope you’ll enjoy to your heart’s content. I throw roses while blowing a kiss! I also think the dynamic cape movements are a highlight.

– Satomi Ookubo (Sailor Moon/Usagi Tsukino) comments
This time one cast member has changed and new characters are appearing.
This year I hope to become even closer to the Sailor Moon everyone loves! I want to make this a play full of love!

– Yuga Yamato (Tuxedo Mask/Mamoru Chiba) comments
I’m thoroughly pursuing the character of Tuxedo Mask. Last time was my first time playing a male role since debuting as an actress and this year I’ll be all the more passionate, strong, and kind! I’d like to show you the aesthetic nature of playing a male role. Please look forward to it!

Leave a Reply to Lightning Neko