From time to time, we have taken on translation requests for items that do not fit neatly into our pre-defined categories like doujinshi or merchandise. This page is a landing point for all translations we have done that are kind of “odd” items. Here you can find things ranging from web page translations to one or two page long short stories.

This is an English version copy of an advertisement page from the July 2013 issue of Nakayoshi magazine, with information regarding the new Sailor Moon musicals (Sera Myu) that will be released in September 2013. Contains information about the cast, ticket purchase, and more!

click here to view the flyer, translated in English, in full resolution

This is an English version copy of an advertisement page found in the October 2012 issue of Nakayoshi magazine, bringing news regarding the re-release of 11 volume box sets of the Sailor Moon DVD and manga series.

click here to view the flyer, translated in English, in full resolution

LEAKED Sailor Moon.co.jp Page
Thanks to reader RZ, we were able to obtain an advanced copy of a page going up on Sailor Moon.channel.or.jp – the brand new COMMUNITY page! In the near future, the “Sailor Moon Channel” page will be accepting fan notes of encouragement to Naoko Takeuchi to celebrate and congratulate her on 20 years of Sailor Moon. Sending pictures and fan art is HIGHLY encouraged, and it seems as though some submissions will be printed in some publications promoting the 20th year anniversary of the series!

click here to view the page in: english | japanese

These are horoscope prediction translations from the June 2011 update to Sailor Moon.Channel

view the series of translations here

Map of the Crystal Palace

Never get lost again inside the Crystal Palace with this spiffy map. (From a Sailor Moon artbook; issue unknown)

Done by request by staff member Misty, this page is a translation of the obituary for Kanbe Miyuk by her talent agency, Rouge. Kanbe Miyuki was the Third Stage actress in the Sera Myu musicals.

Done by request for forum user Anza, these two pages from the original print of volume 17 of the Sailor Moon manga are notes by Takeuchi Naoko about her trip to see the Sailor Stars Musical Special Super Live Show on November 3rd, 1996.

Done by request for forum user Lilly-chan. This translation is technically only a page long, but it’s a brief recap of a series illustrated by Sailor Moon creator Takeuchi Naoko called “Mermaid Panic”. It is essentially a re-telling of the Hans Christian Andersen story “The Little Mermaid”, and the characters in this manga are dead ringers for our Sailor Moon heroes and heroines. Definitely worth a peek!

Done by request for forum user EternalRuth, these translations are basically like year book-style autographs from the actors of Sailor Stars Kaiteiban. These were written to Takeuchi Naoko, series creator, by the cast and crew with adorable little drawings and side notes, all very personalized. Many thanks to Icera of Neo Nobility and Deep Submerge Directory fame for cleaning up these pages for us in Photoshop!

On April 1st, 2010 (JST), Princess Naoko’s Room updated with a continuation of the Animax Character Lunch Box Classroom Event, featuring – you guessed it -, Naoko-sensei’s appearance! Included is pictures of Naoko and her lunch box, with her own personal touches. Looks super yummy: 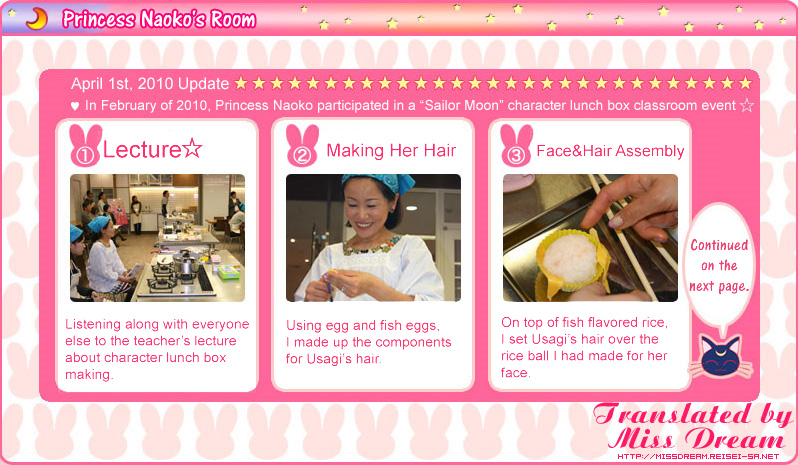 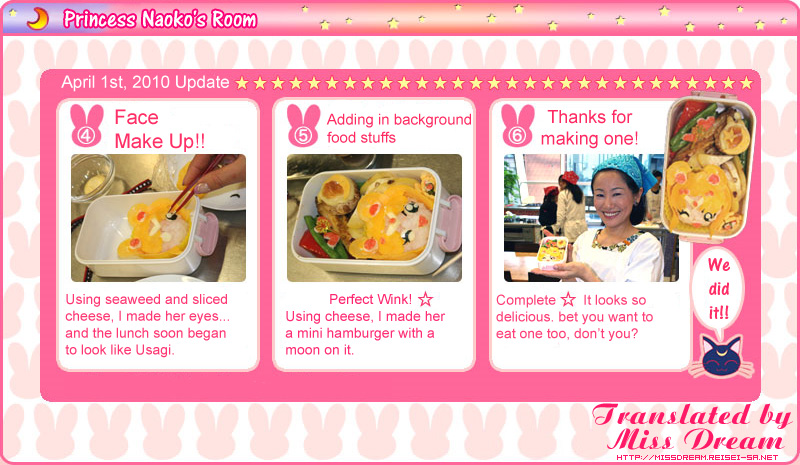