Editor of the Sailor Moon franchise, Osano “Osabu” Fumio was recently interviewed by Hobby Maniax. Here is a full translation: 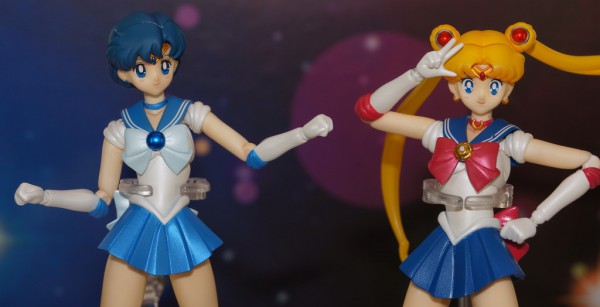 Last year it was announced at a public exhibition that in celebration of the 20th anniversary of the “Pretty Soldier Sailor Moon” franchise that a new anime series as well as other projects were in production. For this series, which has had an unfathomable effect on pop culture, there are now new figurines and other items that are immensely popular (as you can read about in some of our other articles).

With the 20th anniversary project in full swing, one of the earliest items to be released were these figurines – fully mobile figurines, of which we have taken special interest in.

Since the new line of Sailor Moon figurines was originally announced, the Bandai Collector’s Division “S.H. Figuarts” has released Sailor Moon and Sailor Mercury so far. Sailor Mars was shown at Japan Expo in Paris in July, and later that same month Sailor Jupiter made an appearance at San Diego Comic Con in a prototype exhibition. 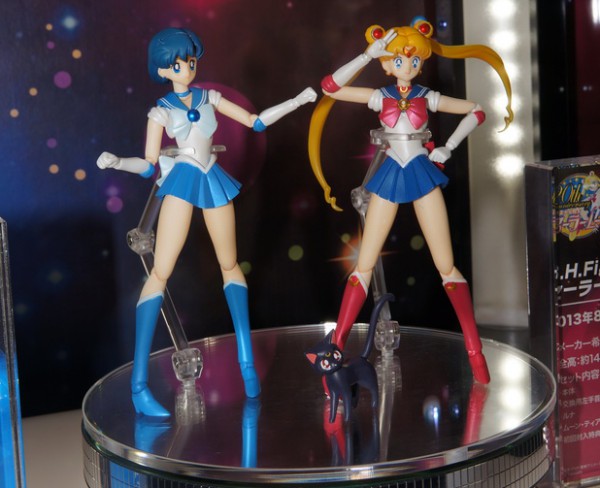 At the Tokyo Toy Show in May 2013, S.H. Figuarts displayed a full color version of Sailor Mercury for the first time.

S.H. Figuarts first announced their new Sailor Moon line after an exhibition in October of 2012 with Tamashii Nation. At that time, S.H. Figuarts was working with the Bandai Collector’s Division group on the Super Deformed Figures Series, “Chibi-arts”, doing a display of the smaller Sailor Moon figurines. Both series were up for display at the time time in a specialty display corner, and were very well received. They even became a hot topic of conversation on Twitter.

In April of 2013 S.H. Figuarts made an official announcement. Beginning May 1st the Bandai Collector’s division displayed a large banner above the Akihabara train station to advertise their show room exhibition. Since this kind of thing is almost never done in promotion of any one franchise, it highlighted the seriousness with which the company was taking this promotional campagin. And then in July, they began accepting pre-orders for the Sailor Mercury figurine. 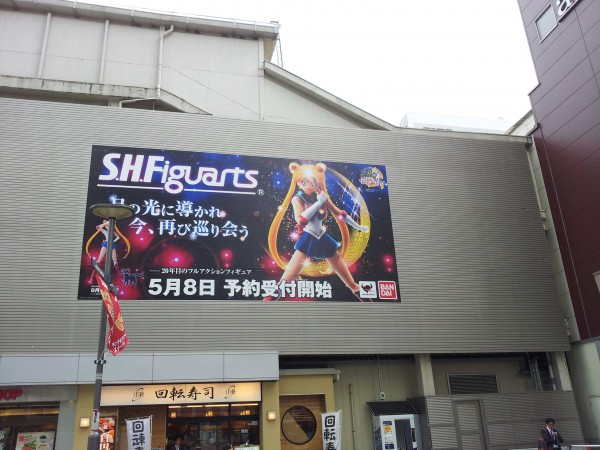 The huge promotional banner hanging above Akihabara train station, next to the AKB48 cafe. This was put in a really conspicuous spot in the heart of Akiba, where many people gather. There’s always some kind of major advertisement in this spot. The campaign we are writing about has already ended.

While we’re on the subject, from now on we’ll be covering figurine sets in the heart of our hobby articles, especially those for “Pretty Soldier Sailor Moon”, but for now let’s turn our attention of the editor at the center of all of the new projects for the anniversary, an exclusive article featuring Kodansha’s Osano Fumio. While his name is Osano Fumio, he goes by the nickname “Osabu”, a name familiar to many Sailor Moon fans. His twitter account has been a hot source of great information on the project. Osabu’s Twitter can be found here

Osabu tells us about the Sailor Moon Hobby World

Thanks to the efforts of S.H. Figuarts the new Sailor Moon series has been a big hit. Until they became the established supplier for the action figurines I didn’t really know much about them. That being said, from the very beinning I thought it would just be a small project, but, they made replaceable face plates that you can change out, with tons of small adjustments you can make to the figurines while you play with them, I think they are a lot of fun.

S.H. Figuarts, Figma, Revoltech and others revolutionized the world of figurines by making them mobile about 5 years ago. But there were no Sailor Moon figurines of that type available. Even at the height of the franchise’s popularity, we were still making small scale production model kits, and towards the very end we began to product capsule figurines that were slightly posable. We had moveable dolls but, they were mostly for little girls, not for collecting maniacs.

It seems that the majority of the buyers of these S.H. Figuarts Sailor Moon figurines are young women. They are great little decorations and they’re pretty cheap, so I guess that’s why.
Because these dolls are posable, with interchangeable face plates, they’re a popular item for young women because you can take pictures of them with your cell phone and share it with your friends. It’s really easy to use your smart phone to photograph the figurines with different poses to make up a whole world of play, and they’re great to decorate with. This is just one part of the Sailor Moon world of making photography art. Another huge fad phenomenon has been making pictures of Sailor Moon characters inside of a latte cup – they call it latte art. You can find tons of examples of it on Twitter.
But anyway, I’ve been hearing a lot that people don’t just want the figurines in sailor soldier uniforms, they want other costume changes for them too. *laughs* And not only that, but people want us to release figruines for the outer solar system soldiers too, they want to collect them all.

From the data we’ve collected so far, it seems like young women really love these figurines, they’ve been buying the SD chibi figurines too, but, since young ladies don’t usually go crazy for mobile figurines we’ve been really shocked at how popular they’ve become. This is related to another comment I’ll make later, but, the number of fans we expected to order was much different from reality, and that’s had an influence on the direction we’ve been making these merchandise items in as well. I know I’d definitely love to see even more pictures of young ladies proudly displaying their figurines.

About the Other Merchandise 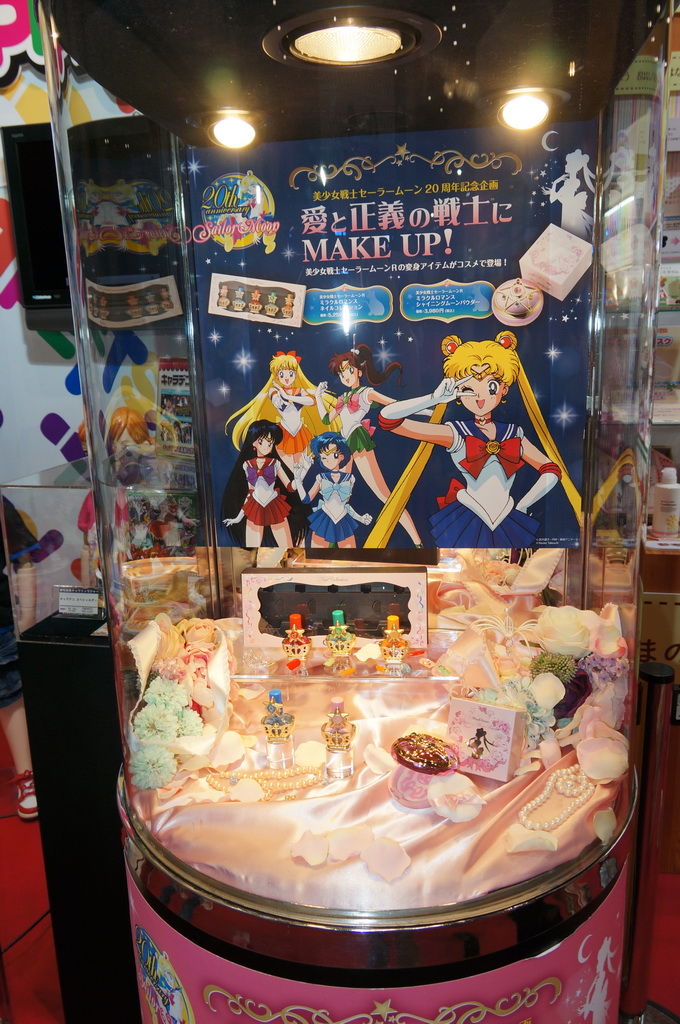 At the Tokyo Toy Show Cosmetics Were on Display

Premium Bandai has been working with an unprecedented fury to fulfill pre-orders of cosmetics items. There’s been a huge rush for them. In fact it was so bad it crashed their servers. It’s been really difficult to accept orders because of these circumstances, but Premium Bandai has really stepped up to the plate to make it happen.

Creer Beaute has released a series of transformation item inspired “Pretty Soldier Sailor Moon” cosmetics intended for young women. After releasing similar items for the franchise “PreCure”, fans took to Twitter to demand items for “Sailor Moon”. The number of re-tweets, replies, and overall amazing response from young women who were in agreement about wanting cosmetic items for Sailor Moon was overwhelming, first with just a few dozen responses, which soon climbed to over 10,000 requests. Since then they have been working with Premium Bandai to supply these super popular items, and the demand has been so huge that the pre-order rushes have caused their servers to crash on several occassions. After two rounds of improvements to the server to prevent traffic from overloading the site, they have been able to accept pre-orders these limited edition items without any issues.

I know you are investing in the creation of other new items as well, but right now your target has been to create items that will be of immediate interest to fans everywhere, things that they must have. First, we knew that people wanted the old transformation items. A long time ago there wasn’t a lot of effort into making these, but we knew people still had an interest. We decided to hope for the best, and put all of our efforts into targetting the creation of these types of items to meet the demand. But there were two obstacles to overcome: did we want to make the items in the old style? – that was uncertain. And we were unsure if the new style would be the right choice in winning over the hearts of young ladies.

During the original broadcast, our targetted Sailor Moon fans were kindergarteners and elementary school girls, but 20 years later all of those kids have grown up into young ladies, whose mania for the 20th anniversary of the series they loved as children is just as strong. So they are still our focus audience. Just as men in the 20s are the main audience for Gundam items nowadays, we believe that young women would be interested in our franchise once again.

Do you have any worries about the copyright for these figurines?

To this very day we still consider requests for copyright to reproduce our small scale production model kits from amateurs. We’re basically in the same place we were with this as back in the 1990s. We always politely check in on any organization who sends this request.

The copyright of the Sailor Moon garage kit figures took the Sailor Moon world by storm, and they had a significant impact on the creation of subsequent figures. The copyright for the general products will be active even after Sailor Moon goes away, so we’re very selective about who we grant that too. If a company is really interesting we’ll consider it, but, in general we do not grant such requests because of various issues that arise.

The Sailor Moon 20th anniversary project has begun. But from what we understand, there’s still a lot more coming our way here in the hobby world.
We are expecting another exhibition at the Wonder Festival from the Bandai Collector’s Division booth with more characters, as well as more magazine articles detailing developments as they happen.
You’re going to want to check back here to get all the latest news about it.