Special thanks to ainomessage for letting me know about this publication, and also for allowing me to scan pages from her copy! 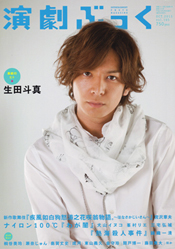 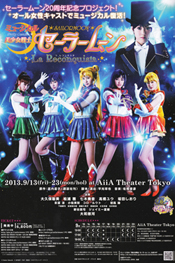 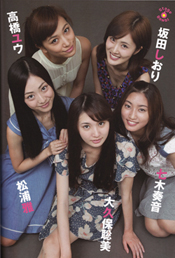 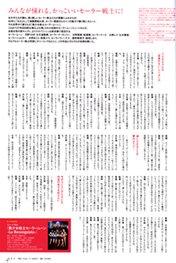 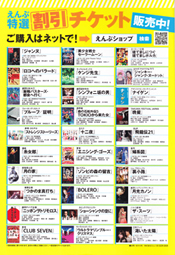 Turning into the cool sailor soldiers everyone looks up to!

The strong beautiful sailor guardians who were admired by girls everywhere have come back!
Ever since its original serialization in “Nakayoshi” magazine in 1992, the charm of the heroines clad in sailor suits “Pretty Guardian Sailor Moon” continues to be loved all over the world.
Until now these legendary musicals, with 27 story lines has been performed over 800 times, until its current revival with an all-female cast and stylish new costumes.
Sailor Moon/Usagi Tsukino/Satomi Ookubo, Sailor Mercury/Ami Mizuno/Miyabi Matsuura, Sailor Mars/Rei Hino/Kanon Nanaki,
Sailor Jupiter/Makoto Kino/YuuTakahashi, Sailor Venus/Minako Aino/Shiori Sakata,
These five will be playing the charming sailor guardian, and we’re here to talk to them about their work and their new roles.

Usagi is a leader “without awareness”?!

We’d like to ask everyone what their impression was of playing a sailor soldier — First off is Ms. Ookubo who plays the role of Sailor Moon/Usagi Tsukino.
Ookubo: I think it fits me! Those around me say that the parts about her like oversleeping, liking games and speaking resembles me LOL
Nanaki: But you get with it at times.
Sakata: Even during practice, she’s looking at her surroundings the most, when it comes to it, she pulls us along as a leader, and she gives us advice that makes us think we should aim for the top, so I think she’s Usagi.
Matsuura: Yepyep. Her lack of self-awareness is most like Usagi LOL
Matsuura plays the part of Sailor Mercury/Ami Mizuno.
Matsuura: She’s a genius, and she’s so bad with boys that she breaks out in hives when she receives love letters. The way that she always worries about Usagi and thinks “I need to save her” resembles me. When she helps her friends or parents, etc. she moved swiftly. But I don’t have an IQ of 300 LOL
Sakata: She’s intelligence and the most with it, and with things like “If I say this, what will they think?”, with the wholeheartedness of wanting to make something good, she’s cautious regardless of age. She’s very knowledgeable, and the way she takes the initiative to act makes me think “That’s Ami”.
Nanaki: Right!
Ookubo: Everyone said everything LOL
Sakata: She doesn’t slack off! LOL
Nanaki plays the role of Sailor Mars/Rei Hino
Nanaki: She sometimes really fights with Usagi, but she gets along with everyone. She attends a high-class lady school, she’s scary when she gets angry, and she doesn’t trust men LOL When fighting, she goes right into the heat of battle to fight, and she properly really likes Usagi. I’m not refined like a high-class lady, though LOL
Matsuura: Rei is a priestess, so there’s a different level of difficulty of approach with Ami. But when it comes to acting, she totally changes. Rei also has a different look than usual when she prays, so the aspect of “She does it when she concentrates” is similar.
Ookubo: In the play, she fights with Usagi, but she doesn’t at all normally.
Nanaki: I always meet up with Saaton (Ookubo), and go to practice together……
Ookubo: She’s looking after me LOL
Matsuura: And Yuu (Takahashi) gets even more help from her LOL
That Takahashi plays the role of Sailor Jupiter/Makoto Kino.
Takahashi: At a first glance, she’s tall, powerful, and strong-minded, how she’s very girlish inside is the same as me, it’s my true nature LOL How she really likes her friends, and when she’s with them, she’s really happy is the same as me. It’s truly an easy role to fill.
Ookubo: During practice, she’s competent and pulls me along LOL
Takahashi: I was told “You’re too strong” LOL
Sailor Venus/Minako Aino is played by Sakata.
Sakata: She’s adult-like, kind of like a hidden leader, and has the power to raise everyone up, but normally she has the role of playing around with Usagi and getting scolded by Rei LOL I also really like fun things and being with everyone, and I’m usually made out to be an idiot LOL
Ookubo: She’s the most messed with character LOL
Matsuura: Shii (Sakata) and Saaton resemble each other. Like when they start talking, they don’t see their surroundings, etc. LOL
Takahashi: She’s incredibly knowledgeable about constellations, and she loves to talk about them LOL
Sakata: She’s non-stop LOL Minako is a girl who falls in love, but my imagination also runs wild LOL As far as Leo girls go, there are many girls like her, and perhaps her love sense resembles me a bit.

It’s like a dream to be able to play this role!

Everyone, apparently you auditioned, but when you each got the part, what was your mental state?
Ookubo: I have no idea what my actual feeling was. It’s a truly big work, so I had both the uncertainty of “Am I a good choice?” and the confidence of “This might go well!”. Before undergoing the audition, when I looked up what kind of girl Usagi-chan was, there were many overlapping aspects. Only, it’s my first musical, so I’m not quite there yet on singing and dancing.
Matsuura: When I was in kindergarten, I saw a Sailor Moon musical, and I still have the video and pamphlet at my house. I absolutely loved it, so it was enough being able to audition, but who would have thought I’d be accepted?
Ookubo: You cried at the audition, didn’t you?
Matsuura: It’s because the original creator, Naoko Takeuchi, was there. I’ve had so many fun memories of Sailor Moon since childhood, when I think that those times wouldn’t have come to be if Naoko wasn’t around…… Therefore, it’s still like I’m in a dream. I’m a fan of the original work, so my eyes are the most scary. I often think that “I’m not Ami-chan at all”, and I’m a little worried, but when I’m wearing the battle clothing and when I’m have blue hair on, I don’t have as much of an uncomfortable feeling as I thought I would, so I’d like to go on with confidence.
Nanaki: I’m not with it whatsoever, and my personality is the opposite of Rei-chan’s. I want to create a Mars that’s more like me, but the current me would ultimately crush the image, so I feel that I have to change it up. Of course, it’s my first time acting in a musical, so I’d like to do my best.
Takahashi: Since I was young, I’d watch it in real time, and for the first time in my life, the females I looked up to were sailor soldiers — To think that I’m able to pass that onto others and that this day would actually come in my life, are the feelings I have. When I auditioned, I thought that if I’m going to do it, it would have to be Jupiter, so I’m happy.
Matsuura: You are truly perfect!
Takahashi: There are songs, dancing, and harmonization, so it’s challenging LOL, but we’ve formed relationships with each other in no time, so I feel that this will be a wonderful work.
Sakata: I had happy tears. I watched Sailor Moon with Mom and my older sisters, and we played transformation together, so it’s like a dream. I saw the movie yesterday, but it’s a work that even adults can enjoy, and every day I feel that it’s amazing that it’s becoming a musical. This work is everything to me at the moment, so much so that everyone appears in my dreams, and I think that it’s a wonderful encounter, so I’m so happy that it would be okay if I were to turn into an old lady LOL

From when you all first saw the show, what was secretly the part you loved best about it?
Ookubo: Love! And I loved Tuxedo Mask (Chiba Mamoru) too. lol
Sakata: Probably the transformations. Seeing the girls fight, it was so dazzling, we all wished we could have been like tht.
Nanaki: I loved the parts that made you emotional.
Takahashi: The bonds of friendship.
Ookubo: Everyone’s purity. They have such beautiful hearts!
Matsuura: The good-looking guys. The Four Generals are awesome bad guys, so they’ll always be in my heart, lol.
Takahashi: There are tons of girl guardians these days, but series done in the best style is “Sailor Moon”. What I want most is for today’s kids to see our performances, and say, “They’re so cool!”, just the way we used to do when we were kids.
Ookubo: I want to show the kids of today who may not know about “Sailor Moon” how it is – to have them say, “Oh, that’s what this series is about!”.

So Momoiro Clover Z is doing the theme song and releasing a CD for it.
Ookubo: When they sand the song, they were really cute!
Sakata: Momoiro Clover Z is really energetic, and they’ve put a lot of effort and hard work into what they’re doing, that’s what I noticed when I first heard them. When I saw them at the EXPO last year, I thought they were really wonderful.
Matsuura: We’re going to sing the theme song on stage too!
Nanaki: So we’re under some pressure lol
Takahashi: All of us girls are going to show you how cool “Sailor Moon” is!