This is a translation of the recent (July 2014 issue) Sailor Moon Crystal article in Animage. Scans by MizunoCaitlin. Translation by ainomessage. Formatting by Galadan. 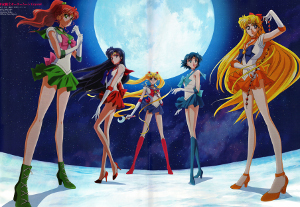 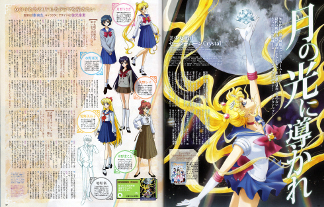 Guided by the light of the moon…

“Sailor Moon,” which swept up an entire generation in the 90s, is returning anew with modern animation. These pretty guardians are shining in a way no one has seen before. Moon Prism Power! Make Up!

The second of the new musicals is coming to theaters!

Details at the official homepage. http://sailormoon-official.com/musical

This anime will follow the manga exactly and is aiming for adult female viewers too.

“Pretty Guardian Sailor Moon” caused a huge boom 20 years ago with that memorable line “In the name of the moon, I’ll punish you!” It is well known that this story about middle school girls who form a team, transform beautifully, and fight monsters had a strong influence all over the world.

And now as part of the 20th anniversary, a new anime “Pretty Guardian Sailor Moon Crystal” is finally going to begin in July! The “crystal” in the title refers to a return to the beautiful, still shining original manga and was the idea of Yuu Kamiki (Toei Animation), approved by creator Ms. Naoko Takeuchi.

“I want to take the entire world of the series in an aesthetic direction so I think the name is perfect,” says director Munehisa Sakai.

This time the animation concept is to “keep the original design of the manga as it is and turn it into an anime.” They’ve also said “We want grown women who watched the original anime to watch this!”, so it seems we can hope for that same splendor of our transforming heroines with a mature feel.

Rei Hino
She’s an only child living at a shrine and possesses spiritual powers. She has slender proportions like a model and speaks like a cool princess. She transforms into Sailor Mars.
Minako Aino
She’s the most experienced guardian, having fought as Sailor V. She transforms into Sailor Venus. She’s reliable, but she’s also an idol fangirl and can be a follower of the latest fads.

Makoto Kino
She’s tall and a strong power fighter. She transforms into Sailor Jupiter. She’s an open-minded, motherly figure but also has a girlish side.
Mamoru Chiba
A high school student who appears around Usagi. He’s actually Tuxedo Mask, who helps Sailor Moon. He’s a cool and mature guy with a calm disposition.

We Want to Portray a Realistic Girls’ Drama

– Please tell us the details about when you were offered “Sailor Moon Crystal.”

Sakai: Around the beginning of spring last year I happened to have the opportunity to go drinking with producer Atsutoshi Umezawa. As I was saying things like “I’m going to work even harder from now on at work!” he just casually said “So how about working on Sailor Moon?” (laughs).

Sako: As if he were saying something like “You free tomorrow?” (laughs)

Sakai: Yeah, and I ended up replying in the heat of the moment (laughs). Later he explained that this time we would be keeping with the style of the manga and starting a completed series over from the beginning as we turned it into an anime.

Sako: I was chosen by audition. I had never worked with Toei Animation before, so I wasn’t sure exactly how they came to talk with me. When they first called in the summer of last year I had no idea it would be for a character design audition.

Sakai: This time we’re aiming for a girls’ manga style, so from the very beginning we thought a woman’s delicate styling would be best. Then we heard about a woman named Yukie Sako who could draw really strong likenesses (laughs) and thought “It would be interesting if Ms. Sako would illustrate Sailor Moon!” That’s how we had you come to the audition.

Sako: Thank you very much. It was a shock.

– Including the tokusatsu of 10 years ago, this will be the third time the series has been brought to life on film. What are your goals this time?

Sakai: Ever since the beginning our concept has been to bring the world of the manga just as it is to life on screen, so my thoughts were “Let’s aim this at the women who watched the show in real time years ago and offer them something that glimmered in their childhood.” I thought it would be good if we could make a show that made women in their late twenties think “How beautiful!” or “How cool!” or even “This makes me nostalgic!” These women have become members of society, experienced their own hardships and have experienced a reality that’s different from that childhood dream of “a prince on a white horse.”

Sako: In other words, it’s so that “jaded” women who are tired of real life can forget it for a while? (laughs)

Sakai: Ahahaha. I hope they’ll remember the dreams they had when they were young girls. So I want to portray beauty, coolness, and aestheticism from a woman’s perspective. I hope to give them the delicate acting of a girls’ anime, the beautiful flow of the clothes and hair and make every important detail beautiful.

– Ms. Sako, as you worked on your designs what things did you focus on?

Sako: For me, this isn’t a remake; it’s “the first anime based on the original manga.” The only thing is that the original manga is 20 years old, so I had to match Ms. Takeuchi’s illustration style while making it more modern and also more anime-like… the hurdles were pretty high (laugh). I started with the cover illustrations from the Perfect Edition manga as the base for my designs.

Sakai: I know you started with Sailor Moon’s design, but it took you a pretty long time to finish it, right?

Sako: That’s right. That was because it was essential that I decide the direction I was going to take the design in. I just couldn’t achieve the balance of Ms. Takeuchi’s style. It was hard to notice it myself, but I kept drifting towards a more modern anime style so my aim was to figure out how to disrupt that. It took several months, but finally I arrived at “the best balance to turn Ms. Takeuchi’s drawings into anime.”

– When we think of Ms. Sako’s style, we also have high hopes for the beautiful male characters.

Sako: This time I had the large task of matching Ms. Takeuchi’s art, so please don’t get any weird ideas about Mamoru, the Four Generals, or the other male characters. I’m going to do them right! On other works I have been the “go-to person for naughty pictures,” though! (laughs)

Every Voice Acting Audition Was Held with Ms. Mitsuishi

– We’d like to hear from you about the casting process.

Sakai: Aside from Ms. Kotono Mitsuishi, all of the others were chosen by audition. They all came with a lot of excitement, but we had each and every person audition alongside Ms. Mitsuishi.

Sako: All of a sudden they had to work along with the real Usagi!?

Sakai: Exactly (laughs). First we had them read from the script alone and then Ms. Mitsuishi would come in and they’d read dialogue together.

Sako: That sounds like a hidden camera show! (laughs)

Sakai: The final deciding factor was inspiration. As in whether or not they suited the character. For example, Ms. Hisako Kanemoto seemed to fit a calm, intelligent character.

Sako: In the manga Ami says things like “Studying is the only thing that matters to me…”, doesn’t she?

– Lastly, please share with us your enthusiasm about the upcoming premiere in July.

Sakai: We’re aiming to do something new, so I would like it to align with a different vector than previous works aimed at girls. It will have a bit of a mature feel… so it will include a love story and also themes of not always being a “good girl.”

Sako: The relationship between the five girls illustrated by Ms. Takeuchi is realistic. They complain about things, they don’t always act super clingy, but they’re still good friends. I also have vivid memories of how jealous Usagi got when Chibiusa appeared.

Sakai: One of the great things about the manga is how relatable it is for girls.

Sako: Anime are often made by men, so I think it’s pretty difficult to convey the nuances of a manga written by a woman… For example, Usagi and Mamoru have a very close relationship in the manga, so they must have a special way of talking and thinking about each other. Because we’re following the manga closely, I hope we can convey that sort of atmosphere correctly.

Sakai: Above all, I want to portray this drama properly. I want to focus on realistic emotions and I hope we can do a good job of portraying the life of normal girls who transform into magnificent guardians. 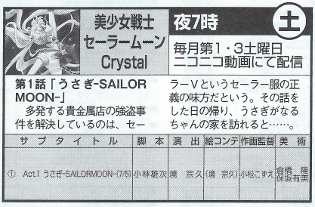 Episode 1 “Usagi – SAILOR MOON – ”
The person solving the repeated burglaries of jewelry stores is said to be Sailor V, a sailor suited friend of justice. Just after talking about this story, Usagi visits Naru’s house and….