This article in the January 1993 issue of “B-Club” Magazine (published in December 1992) summarizes the Sailor Moon merchandise of 1992. At the end are shown three further Sailor Moon-related pages appearing in the same issue. Also, untranslated scans of the whole issue can be found here. 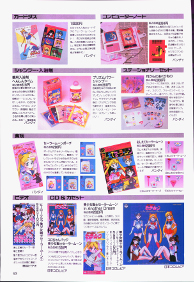 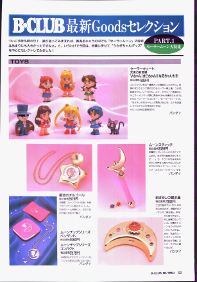 At long last this year is at an end! If we take a look back, of all the characters there really was a lot of “Sailor Moon” information among them. And so this time we put together a special feature on “Usagi-chan goods”!

These three pages appear in the same issue, but are unrelated to the Sailor Moon merchandise article; the first two use Sailor Moon illustrations to introduce two further articles – about super heroines and school uniforms in anime – and the third one is the only part of those two articles that actually has anything to do with Sailor Moon. 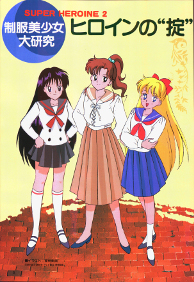 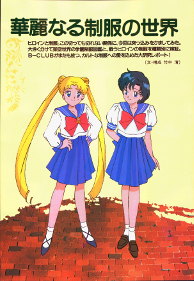 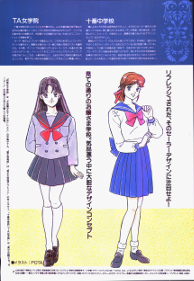 “Laws” of the Heroine

The magnificent world of school uniforms

Heroines and school uniforms. The connection couldn’t be cut even if we tried, so we are digging into this matter. School uniforms of the fictional world are generally categorized in this illustrated reference book and the uniforms of fighting heroines are classified. B-CLUB releases another big research report about the cult-like love for school uniforms!
(Article by Kiyoshi Takenaka)

According to rumors, its whereabouts seem to be in Azabu. As expected this sailor uniform is somewhat different from the others as well. Two large ribbons, one on the chest and one on the lower back, are main features. With bright colors and a miniskirt length that hits just above the knee, as with many junior high uniforms, it’s good to see a wholesome and appealing design.

The summer uniform has puffy half-sleeves (like paper lanterns) which have a pair of lines around the cuff. The rest is based on the winter uniform. For a junior high school that has school tradition, pierced ears or broaches adorning ribbons can be spotted among the students but it seems this isn’t put into practice at this school in particular. Could it be that it’s left to individual independence? It must be said that, for a public school, this is a pretty advanced way of thinking.

We noticed the sailor design that was refreshed on this one!

Since this school is close to Juuban Junior High School, it could be located somewhere along the Yamanote line or the Hibiya Line (in the case of the subway). The uniform gives a chic impression but also has the shortest skirt among the uniforms introduced this time.

The rare coordination of a blazer on top of a sailor uniform draws attention. Summer uniform is a half-sleeved sailor uniform and a vest of the same color is worn in the winter. At that time it should be noted that the ribbon does not match the sailor color. The high socks and mini skirt go together well and give a great impression. Even more than the Juuban Junior High School, this uniform gives a lively impression within its elegance. There’s no mistaking that this is one of the most popular uniforms within the city.

Clearly a school for princesses. A daring design concept with a hint of elegance.

1Cardass machines vend cards and other flat objects, like stickers or temporary tattoos. You have to enter coins into the machine, and then turn a crank to get your item.