Happy Thursday Miss Dreamers! Well, I hope it’s happier for you than for me who is sick today, but we can all enjoy today’s postings. Today we bring to you the translations of two interviews. The first is the highly anticipated interview of Naoko Takeuchi in the new publication, ROLa Magazine! The premiere September 2013 issue went on sale earlier this month, and features the first interview with Naoko Takeuchi done in over 11 years! While we will eventually have a full raw scan of this magazine, for the time being, you can see a raw scan of this interview by clicking on the image below. Following the image is the full translation of this interview. 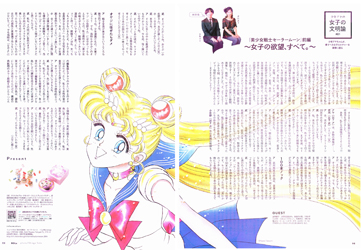 The girl’s imperial magazine ROLa has gone worldwide at last. In this monthly section, we’ll be exploring and analyzing the world of girls culture. To give some examples, we’ll be viewing this world through the lens of girl’s comics, fashion merchandise, idol groups, so that all of us, not just me, can say that we’ve gotten a good scoop on all the latest happenings. Aren’t you proud of me? I can’t help it, I’m a little proud of myself… anyway, in that spirit, super cutely, pridefully, shamelessly, I’m going to dive into writing records of my interactions with those who shape this world. This time, episode 1, we will discuss a series which celebrated its 20th anniversary last year, a series which is currently in renaissance, “Pretty Soldier Sailor Moon”. I don’t think I need to give any introduction to this show, because the phrases transformation, love, handsome guys, friendship, jewelry, dresses, antique lamps, the past, and the future, instantly come to mind…
It’s a condensation of all the things girl crave, a 1990s era girls comic book series, the most iconic work of its time. It’s name is famous all over the world, and even today the passion girls have for that show continues on. Therefore, in this issue’s article, we have invited series creator Naoko Takeuchi and her editor Osano Fumio for an interview with us… and for some reason, they decided to indulge us. I’ll say it again: they actually decided to do this! When I got the news, I was so excited, I screamed, I almost foamed at the mouth and fell over. W-what should I do! To be the one allowed to conduct this iconic legend’s first interview in 11 years… w-what, what should I do! I’ve been frightfully nervous, so I’ve been eagerly doing research to make myself knowledgeable enough to do this properly. And, here comes our goddess!!

Aya: I-it’s actually the goddess herself…
Takeuchi: I’m nothing of the sort. (laughs)
Aya: Ah, please, congratulations on Sailor Moon’s 20th anniversary!
Takeuchi: Thank you.
Aya: Deep down I’m really just a huge nerd, and I’ve been extremely nervous, and so today my head is swirling with the memories from when I used to watch and read the story back in the day, so I’m going to be asking you all sorts of things. So let’s just jump right in – I’d like to hear from you all the details of how Sailor Moon first came to be…
Takeuchi: I don’t remember exactly but, I wanted to make a series like Goranger, but with a squad of five fighting girls. Pretty girls who would transform to battle bad guys.
Aya: I see… Personally, I’ve always thought that all of the sailor soldiers are really frank and forthright, they’re liberated, they are able to socially interact with the world around them with the freedom of men, and their strength is what makes them attractive; were you determined to make characters like that, or did that develop because of external reasons?
Takeuchi: Yes… At the time because I was personally very independent, I suppose it is natural that my characters also shared my traits, and I think that the grand scale of the story I created also reflected my own personal liberation. But I think all that energy has been used up now. (laughs) At the time I wrote the series 20 years ago, I was youthful like the girls in the story, and I think that was another contributing factor.
Aya: So your characters had the same independence that you did, you mean.
Osano: But to be fair, things are much more strict today than they were back then, so we could get away with more. For example, the scene we created where Usagi, a middle school girl, gets obscenely drunk would never pass the censors today.
Aya: That’s true. But, while we’re on that topic, for the readers the story was a glimpse, a way to peep into the adult world, which was amazing… and going off from that point, what would you say about the episodes featuring Tuxedo Mask?
Takeuchi: Well, the truth is, he was there for parody. For middle school students, prowling the streets of Roppongi or Shibuya, surrounded by tons of male figures in black clothing, well, let’s just say it has a certain naughty appeal. (laughs)
Aya: N-no way… Tuxedo Mask is a Shibuya dude who wears black!

Haha, anyway. I think in Naoko Takeuchi’s work, there are words that bring back a memory of the series. For example, “make up”, the transformation call. For young girls, screaming out “make up” as loud as they could was really cool. How did you come up with some of the catch phrases for the series?
Takeuchi: Hmm, let me think about that. I think I developed them when I was trying to meet deadlines.
Osano: She can be a little forgetful so I’ll fill in here, but back when she came up with the phrase “Moon Prism Power Make Up” I made her repeat it out-loud 30 times before we finally decided to go with it. Another that was really intense to work on was “In the name of the Moon, I’ll punish you”. I think I made her reconsider it at least 100 times before we both agreed on it.
Takeuchi: I suppose that’s true. You know Osabu, you were a really strict editor. (laughs)
Osano: It seemed like at least a hundred times, anyway.
Takeuchi: Definitely.
Aya: But because you made such careful choices back then, even today your legacy is still shining strongly.
Takeuchi: Back then, when I was making the characters, I used to think about how best to develop them with all my might. But you know, when I had to re-think something 100 times before my editor would accept it, I used to think to myself, what the hell am I doing with my life? (laughs)

Don’t leave it to old men.

Aya: To me it’s fascinating that all the girls in the show are so beautiful.
Takeuchi: Yes. But that’s how girl’s comics are. It’s important, right? But back then, the old men at Nakayoshi (like Osano-san) didn’t really get that. From the onset, I said “I want to make a comic series about a squadron of five beautiful fighting girls”, and they said, “Hold up. In a fighting squadron, there’s always like one comically obese character, and another nerdy one that wears glasses. How are you going to make all five of them beautiful?” and the complaints went on and on. Oh, those old men… I think they didn’t understand girls comics at all.
Osano: It really was like that… I might be a little wrong on all the details with what I’m about to say, but… I think at the time, the only fighting squadron shows were like, “Gatchaman”, and shows that were made in its same image, where the characters were all typecast.
Takeuchi: Back then, I thought, “I’m going to show these old grandpas that beautiful girl characters can be good for business, and I’m not leaving my concept in the hands of old men.” So I had to work hard to develop a sense of beauty and elegance in my characters, no matter what their type was. Back then, the old man editors at “Nakayoshi” magazine thought I was being stubborn, and they didn’t much care for the opinions of us lady authors, it was a difficult time.
Aya: So you think the old men didn’t understand the sensitivity or nuance to your idea.
Takeuchi: Definitely. It was also a challenge when it came to deciding on a color scheme. At first I had proposed using a pastel color palette, and the old hat, old timer editor grandpas said, “You need to use bolder colors”, “If you want the magazine to sell you need to use lots of blues and greens, or bright yellows”, “If you’re going to use pink, use a dark pink”, and they made all kinds of demands about it. Actually, when I first decided on the color of Sailor Moon’s hair, I wanted it to be silver, but the old grandpa editors didn’t like that decision either, and they really got upset, and said that the magazine would never sell if I used such a dull color. When I first said that I thought blonde hair would be a more Princess-like choice for the main character, someone chuckled and said “At least it’s not grandma-style like last time”.
Aya: So that’s how Usagi’s hair ended up being blonde! How interesting!
Takeuchi: I think I made the right choice there, but making decisions like that was always a battle.
Aya: It sounds like from your stories that you went through a lot of tough battles with the old men back then. Maybe even more battles than Usagi and the gang faced…
Takeuchi: That might be true. (laughs)

(To be continued in the next issue)

I hope y’all enjoyed that as we have over here, especially the big news that there will be more next month! We have already pre-ordered the next issue, and intend to bring you the second part as soon as we are able! =) 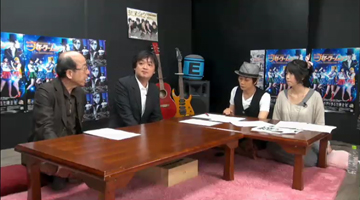 Next up today is a clip from the show, God of Backstage. A week ago today, they featured Osabu as a guest in its last segment, showing off some of the new merchandise and talking a bit about the new musical next month. Our download contains the segment that features Osabu, and can also be acquired via torrent.

We hope you enjoyed this mid-week update with translations of these brand new interviews! See you next time!