Thank you to Mizuno Caitlin from Wild Mushroomland, who kindly scanned this Naoko Takeuchi interview in ROLa Magazine November 2013 issue! Because of Caitlin, not only can we share these scans, but we could also translate this interview into English. Please enjoy! 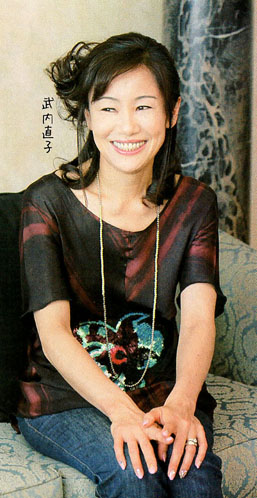 Through some miracle, my wish to interview Naoko Takeuchi has come true. As I’m talking to my goddess, as she discusses her feelings, she becomes more and more human before my eyes, her smile making me feel totally dumbfounded. We began this interview by talking about the birth of Sailor Moon, but this time we’re going to discuss the new merchandise, as well as some more personal information about the goddess herself. This is a really valuable piece. I hope you’ll cherish it as much as I did, so read on!

Aya: These days it’s just like back when Sailor Moon first came out – there’s so much new merchandise for sale. I’ve been collecting it.
1
Takeuchi: I used to buy a lot of it too; I used to have giant piles of the stuff all over the place. And then I sold a lot of it off. I really regret that now.

Aya: Hearing that makes me want to cry…I heard that you had some influence in the design of them, isn’t that right?

Osano: There was one rod (Super Spiral Heart Rod) in particular she did. We were up late at night in a restaurant and she made the entire design there.

Takeuchi: That’s so nostalgic. Even though I’m no longer involved, I think the new stuff feels really authentic. I wanted the new designs to have a regal, beautiful image to them, and the designers have really come through on fulfilling my request.

Aya: So you want today’s children to have luxury, then.

Takeuchi: You know, there’s something I’ll never forget – I was talking to our manager at Bandai about pricing, and he said, “If we go with your plan, we’ll loose .04 of a yen”. When I think about that conversation now, I think he was talking about the price to manufacture the items in China, and how to keep the cost low, our managers used to negotiate to push the prices down by even just one yen. I was really shocked by that.

Aya: And to think that so many wonderful things came out of such negotiations. But still, all of the Sailor Moon items have a feminine elegance to them.

Takeuchi: It was impressive – there was a female manager at Bandai who kept saying, “The aura is really important”. What was this “aura” she kept talking about? I used to think to myself – maybe she means that it should be round. “Please make sure this has the right aura”, or “This aura here” – she used to talk about it all the time, “aura” was her keyword, and she did everything in her power to make sure it was in the items.

Aya: So the reason the Sailor Moon items are so magnificent is all thanks to this big important “aura”!

Takeuchi: When I made Sailor Moon I was in my 20s, and there were a lot of young female managers at Bandai too. I think the timing of us girls was perfect – in fact, it was long overdue for us to be involved in the industry. Nowadays there are series like “K-On!” that I think are really cute, and from what I understand there are a lot of women on the staff involved in that franchise. Women have a certain aesthetic sense, and I think their sensibilities are reflected in the products they make, which is something I’ve always wanted to see happen.

The Gods of the Goddess

Aya: Mrs. Takeuchi, I have a more personal question for you this time. I heard that before your debut as a manga artist, you used to draw original cell stills for fun…

Takeuchi: I won’t get too specific so I don’t give away my age, but, back when I was in high school I bought a “How to Draw Anime Cells” kit from an anime shop, and I used to draw with it a lot. I used to play hookey from school a lot to go to anime stores (laughs) I was a total nerd girl.

Aya: Can you share with us some of your favorite girls comics series?

Takeuchi: When I was in kindergarten, I had three cousins, all sisters, who lived next door who used to always show me their manga. I loved “Aim for the Ace!“, “Rose of Versailles“, “Haikara-san ga Tooru“, “Suna no Shiro“, and others – my cousins set the standard for what manga I got to read, but one that I really loved as a child was “Candy Candy” – I was entranced by it.

Aya: So you liked the stuff that was on the girlier-side.

Takeuchi: I really loved the difficult but dark works from the 1960s, especially those of Machiko Satonaka and Waki Yamato. After that, I loved the beautiful, dramatic work of Kimiko Uehara. I also loved the dream-like works of Chieko Hara and Yumiko Igarashi, those five women were like goddesses to me. And of course – Suzue Miuchi is my goddess too! I have all of her tankoubon releases. Her series “Glass Mask” is fantastic. I used to read it as a serialization, way too much, and it had a tremendous effect on me.

Aya: So even the goddess herself has gods of her own…

Takeuchi: Well you know, I wasn’t just interested in girls comics. I became absorbed in Yuki Hijiri‘s “Locke the Superman“. I loved it. It was one of the series that got me really interested in science fiction.

Aya: It certainly sounds like the essense of “Sailor Moon” came from a lot of places.

Takeuchi: Exactly. I also love the science fiction works of Leiji Matsumoto, and I read a bunch of the manga series by Moto Hagio and Keiko Takemiya! I love it even now. Those four are also like gods to me.

Aya: Hearing the goddess herself describe these works…it fills me with emotion.

Takeuchi: When I became an adult, I re-read the works of all the masters, the artwork and the stories were perfect, there weren’t any gaps in it. In those days, screentoning and GC wasn’t really used, and the works are still incredible. I’m embarassed at how shoddy my own work is by comparison. My scribbles aren’t the real thing. And to my fans, I have to say, I’m really terribly sorry about my lack of professionalism in that regard. I really apologize for how unsightly my manga is.

Aya: How can you say that about yourself!

Awake at 5 AM to Make Lunch

Aya: Do you have any hobbies these days?

Takeuchi: I still love clothes shopping, just like I did back in the day, but nowadays I shop online – it’s much cheaper and there’s so many cute things to choose from. Though to be honest, I don’t get to go shopping all that much, I rarely have any time.

Osano: Even though you wake up really early in the morning, right?

Takeuchi: Right. I wake up at 5 AM to make lunch for my kids every day…

Takeuchi: Well, the kids have to have a proper lunch to eat, and that wouldn’t happen if I didn’t do it.

Aya: You’re kidding! Now I almost want to scold somebody about that! Anyway, about your kids, how are they doing…

Takeuchi: My son is in 6th grade now, and my daughter is 4 years old.

Aya: Have you shown your daughter Sailor Moon…?

Takeuchi: Only a little bit. It embarasses her. If she goes off to camp with say, a Sailor Moon back pack, then everyone points at her and says “Oh look, it’s Sailor Moon herself!” – even the teachers. (laughs)

Aya: I should think that running into Sailor Moon by chance would be romantic. Maybe they’re just jealous that she has the goddess herself as her Mama.

Takeuchi: Oh no, I’m sure that can’t be – I’m a pretty scary mom at home. (laughs) I always thought that when I became a parent someday, I’d raise my kids with a lot of freedom, that I wouldn’t be like my own parents were. Now that I think about it, I wish I were more like my own parents were, I catch myself saying “You can’t do that” “You can’t do that, either”, “No no no” all the time. I’m just a regular old mom after all (laughs)

Aya: It almost sounds like you’re scolding me now…