The musical “Pretty Soldier Sailor Moon -La Reconquista-” opened at Shibuya AiiA Theater Tokyo on the 13th. The re-arrangement of the theme “Moonlight Densetsu” by idol group Momoiro Clover Z was used and the same group made an appearance in the show via video to the excitement of the audience.

The musical is part of the 20th anniversary project and returns after 8 years. The protagonist Sailor Moon is played by Ookubo Satomi (17), and fresh faces Matsuura Miyabi (17), Nanaki Kanon (16), Takahashi Yuu (22), and Sakata Shiori (22) play the Sailor Soldiers.

During the show, MomoClo appear via video as part of a “Love App” downloaded during a game show. Each time one of the members will appear and cheer on the Sailor Soldiers.

Ookubo and the others, juniors from Momoiro Clover Z’s agency, said “We’ve only seen them in videos, but they’re cute.” Yamato Yuga (36), who plays Tuxedo Mask, said of the 5 members “MomoClo is cute, but you all are cute too” and made everyone laugh.

(TN: Ookubo Satomi and Nanaki Kanon are in the same agency is MomoClo, but the rest of the cast is not.)

Matsuura added “Watching Sera Myu as a child is what lead me to start ballet lessons. I have a lot of emotional attachment to this play.” Sakata said she came to the theater nervously. “I got worried and sent a text (to the Sailor Soldiers),” she said, speaking of the strong bonds between the Sailor Soldiers. The star Ookubo expressed her excitement by saying “The outfits are so flashy, they make me so excited. It’s like we jumped right out of the manga!” and “If you don’t come to watch, I’ll punish you in the name of the moon!”

After the press conference a dress rehearsal began and the cast performed the show just like it was the real thing. The Sailor Soldiers, Tuxedo Mask, and the Dark Kingdom battle with flashy song and dance and lots of action. In addition, it was revealed that Momoiro Clover Z, who will be singing “Moonlight Densetsu,” appear by video. Each day a different member will be shown, and they will appear as a character that represents their own personalities.

The “Pretty Soldier Sailor Moon” musicals ran from 1993 to 2004 with 27 shows and over 800 performances. “La Reconquista,” the first show in 8 years, has an all female cast and can’t be missed.

(TN: Check out the original source for lots of images!)

In preparation for the opening day of the musical “Pretty Soldier Sailor Moon -La Reconquista-” the cast has been rehearsing day after day.

And one day the original creator Ms. Takeuchi Naoko secretly came to visit that rehearsal hall that overflows with enthusiasm!

That day the cast was rehearsing a battle scene between the Sailor Soldiers and the Shitennou and the large gathering of cast members was very happy about Ms. Takeuchi’s visit. They put even more power than usual into their acting and singing! 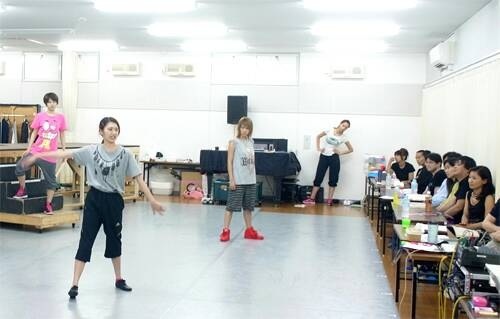 After the rehearsal ended, the cast gathered around Ms. Takeuchi for a commemorative photo!! 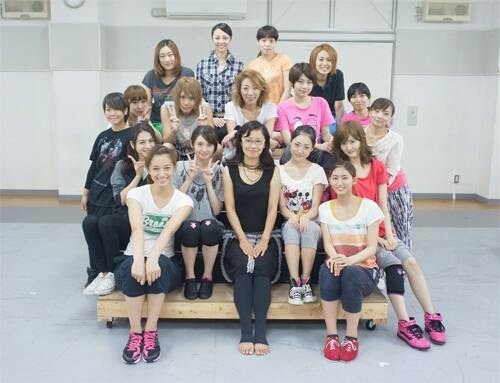 Everyone was grinning widely at the opportunity to take a photo with Ms. Takeuchi, the creator of the Sailor Moon series that girls admire.

Ms. Takeuchi, thank you very much for coming despite your busy schedule and for bringing wonderful gifts!

The cast and staff will keep the power she gave us in our hearts and work hard to prepare for the show.。

The curtain finally opens next week on 9/13 at AiiA Theater Tokyo. Please look forward to it!!

Engeki Kick: We asked the soldiers of “Pretty Soldier Sailor Moon” about the source of their energy!
2013.08.31
Original Source

The tradition of “Sailor Moon Musicals” has returned with a new all-female cast! Before the curtain rises on 9/13, we asked the main cast of 5 soldiers about the source of their energy.

Just how do their roles come together?

By all means, please find out at the theater!

We’ll also be publishing a round-table discussion with the five girls in our October issue of Engeki Book (Out 9/9). Look forward to it! 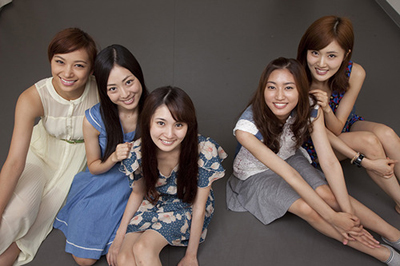 What’s the source of your energy?

Ookubo: For me it’s games! If I’m alone no matter what I do it’s boring, but I enjoy playing online games with friends. That’s the only time I’m truly happy. (lol)

Takahashi: For me it’s all about family.

Takahashi: I have my parents, an older sister, an older brother, and a younger brother. My mother is Filipina, and when I hear the story of how my parents met I get all teared up… My sister and I are in show business so we live in Tokyo, my older brother lives in America, and my younger brother lives in a dorm for soccer players, so we’re all spread apart but we’re truly connected. I’m sure everyone’s family is like that though (lol). My family is what keeps me going.

Matsuura: She really is Mako-chan (lol). For me it’s listening to music. I guess I like the Western rock music of the 60s~80s that was popular during the bubble economy. Melodious songs with keyboard or piano. Stuff like Queen, Elton John, The Doors – they all have this energy that only existed in that era. Even on days when I’m regretting my mistakes, if I listen to music before I go to bed I feel relaxed. Depending on my mood I switch between ballads and hard rock. The last part of my day has to be listening to music, or I can’t go on. (lol)

Nanaki: For me, I’ve got to have my mom…

Nanaki: I love my mom, and when I have to do something alone or I’m having trouble communicating with someone I ask my mom for advice right away. I’ve told my mom “I hate this about myself” many times. She’ll talk to me about all of my weak points.

Ookubo: I’ve worked with Kanon for a long time, and she’s seriously with her mom everywhere.

Nanaki: That’s because I can’t take the train by myself…

Ookubo: When you look at them you think “They’re really close.”

Nanaki: Thank you very much.

── Please stay close to her forever. Ms. Sakata, what’s the source of your energy?

Sakata: I’ve got to talk to someone… (lol) I’m super awkward, so I’ll talk about anything whether it’s okay to talk about or not. (lol). I used to be shy, but once I entered the entertainment business I was able to grow to like myself a little bit and became able to talk to lots of people. I think communication is very important, so without everyone at the rehearsal hall I don’t think it would be any fun and we wouldn’t be able to make a good show. Whether it’s my family, my close friends, acquaintances, or co-workers, I always strike up a conversation first. Without connections to other people I couldn’t keep going.

Nanaki: Talking with her is super fun.

── You become Ms. Nanaki’s mom during rehearsals, don’t you?

Sakata: She’s aaallways looking at me. With a face that says “help me” (lol) 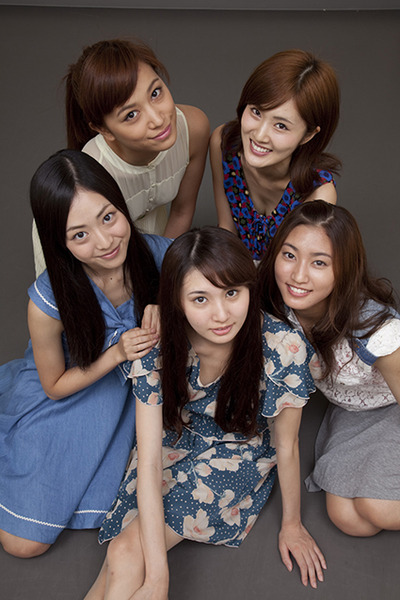 Ookubo Satomi (Pictured bottom row center): Born in 1995 in Chiba prefecture. She’s made appearances in TV dramas, commercials, and magazines. This play will be her debut work.

Matsuura Miyabi (Bottom left): Born in 1995 in Hyogo prefecture. In 2012 she came first in the JUNON Girls Contest Grand Prix. Since then she has been in the TV drama “35 Year Old High School Student” and the plays “Girls’ Story,” “My Home,” (Saibara Reiko Stage Festival 2013) and more.

Nanaki Kanon (Bottom right): Born in 1997 in Tokyo. While appearing as a regular model in the magazine “Nicola,” she has also appeared in TV dramas, commercials, the film “Confession” and more.

Takahashi Yuu (Top left): Born in 1991 in Shiga prefecture. She has modeled in countless magazines. In addition, she has done a wide variety of work such as appearing in “Kamen Rider Kiba,” TV dramas, variety shows, and commercials.

Sakata Shiori (Top right): Born in 1991 in Tokyo. As a member of Idol College until 2012 she appeared in the TV drama “Goldfish Club,” the play “SING!” and more. 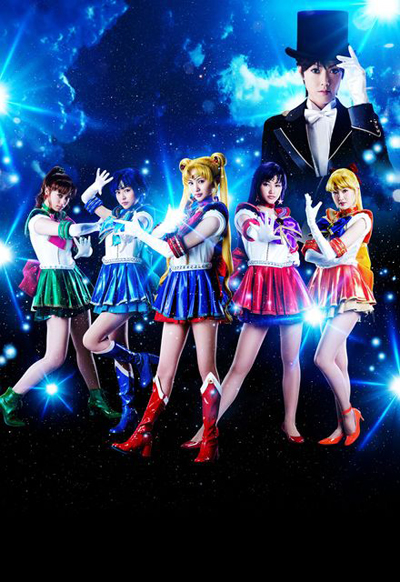 The musical “Pretty Soldier Sailor Moon -La Reconquista-” will run from 2013/9/13 (Fri) ~ 9/23 (Mon) at AiiA Theater Tokyo. Details regarding the goods to be sold at the theater have been determined! 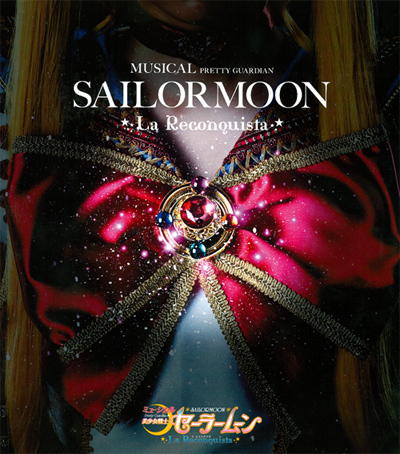 The original goods to be sold at the theater include a pamphlet (pictured above) featuring photos of the cast in costume, 20th anniversary of the musicals history pages, and a column by manga editor Osabu; two different colored penlights that sparkle like stars; and highly collectible photos (details to be announced at a later date).

On top of that, the “Miracle Romance Shining Powder” aimed at adults and made by Premium Bandai, which has already finished taking reservations and was insanely popular will be sold by reservation at the theater. (Limited to 300 customers). 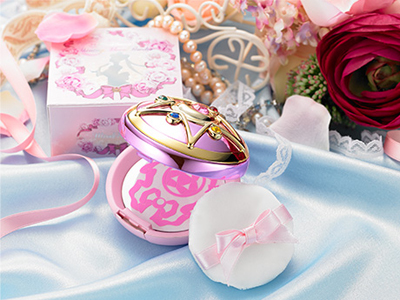 In addition, the currently on sale and very popular iPhone5 cases will also be sold at the theater. We plan to add even more goods in the future!

With this amazing cast and the opportunity to find must-have goods, you’ve got to keep your eye on the musical “Pretty Soldier Sailor Moon -La Reconquista-“!

■Photos (Details to be announced later) 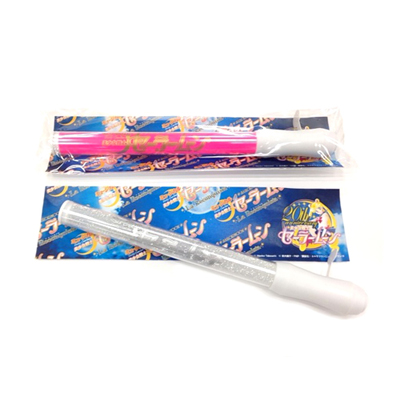 ※Additional goods to be added later.

Production Blog ~ Behind the Scenes of the Sailor Soldiers’ Photoshoot~
2013.08.26
Original Source

Even on a cool, refreshing day like today, the full cast is rehearsing!!

We’re taking the baton in the cast blog relay and bringing you a behind the scenes report from the Sailor Soldiers’ photoshoot.

~~~Off-shots from the Sailor Soldiers’ Photoshoot~~~

I’m sure many of you have seen pictures on blogs and at the theater, but here are the Sailor Soldiers’ main visuals!!

The production staff is here to bring you a report on the photoshoot!!

The 5 Sailor Soldiers had a photoshoot at a downtown studio.

[Here’s one shot of Satomi turning into Sailor Moon… Make Up!!] 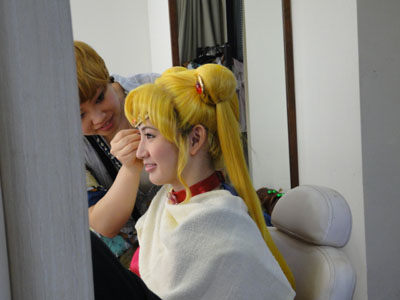 Here’s an off-shot of one of Sailor Moon’s poses. 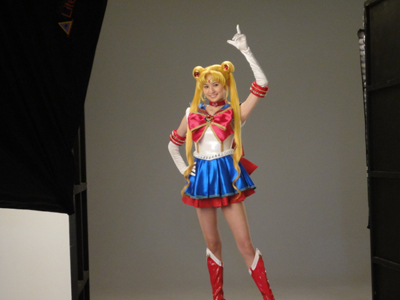 The shoot went well and we got lots of amazing pictures!!

The pamphlet is currently in production!! Please look forward to finding out what kind of shots are included. ☆☆

Next up, here are some off shots from Nakayoshi.

This is Ookubo Satomi (Sailor Moon) and Matsuura Miyabi (Sailor Mercury)’s first time working together, but they already seem exactly like Usagi and Ami.

The ditzy Satomi was taking the reliable Miyabi’s lead. 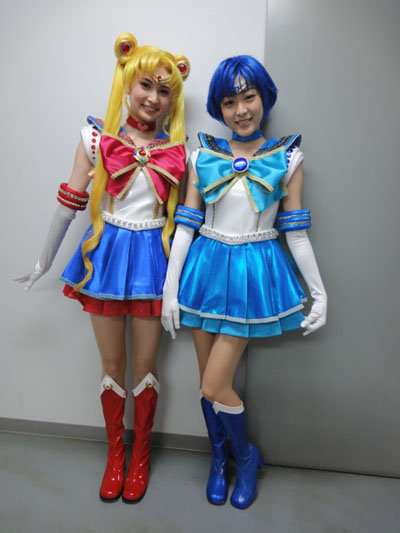 Nanaki Kanon, who plays Sailor Mars, is so cool and collected that you’d never know she’s the youngest in the company!! She’s perfect for Rei. 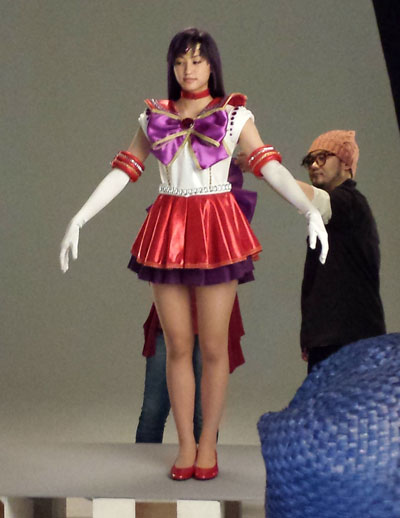 Takahashi Yuu, playing Sailor Jupiter, is the big-sister type, just like Makoto. As she waited for her turn she practiced her poses, and here she is taking production photos. 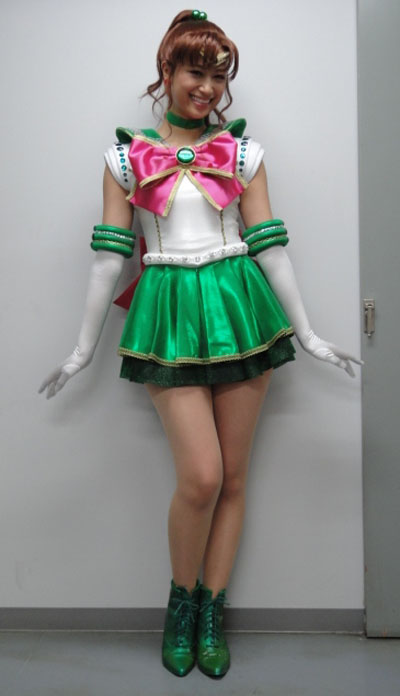 Sakata Shiori is perfect for the ladylike but strong Venus. 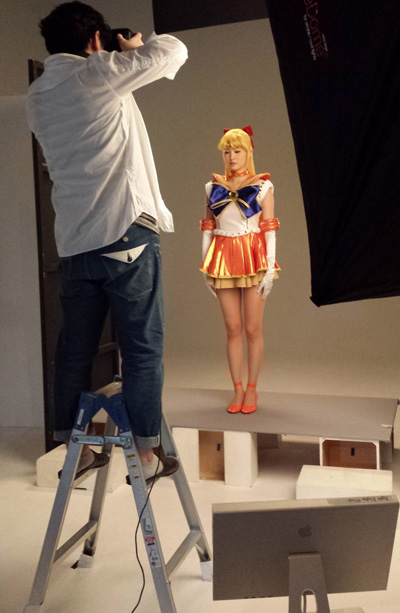 As soon as we revealed it, we received a huge reaction!! 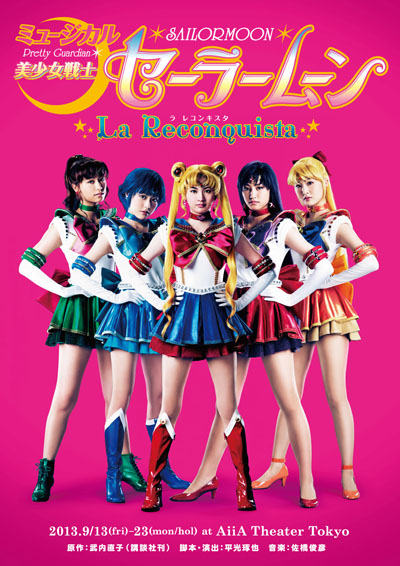 ↓And here is the main flyer!! 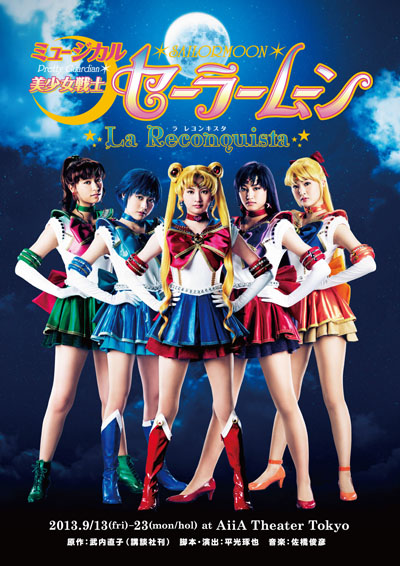 We’ll keep bringing you news through this blog, so please look forward to it ☆☆☆

2013.08.21 12:12 PM | Original Source
@sailormoon_20th: Keyaki Hiroba is a free outdoor stage♪ But…because the stage is under the blazing sun, it’s as hot as Mars…! These are Burning Mandala conditions! Those of you who come, don’t forget to be prepared so you don’t get heat stroke~! (>_<)

2013.08.21 12:17 PM | Original Source
@sailormoon_20th: During a stage rehearsal Matsuura Miyabi, who plays Ami, was spraying cooling mist on the Sailor Soldiers. Watching her, the staff whispered “Shabon Spray…!” Everyone, please remember to be totally prepared with water, a hat, and other cooling items♪