Happy weekend Miss Dreamers! It sounds like everyone has been enjoying the new musical, Sailor Moon: La Reconquista, throughout the week. I’m still impressed that we busted through the network pipe. ^^;; This weekend, we’re adding more goodies to this section! 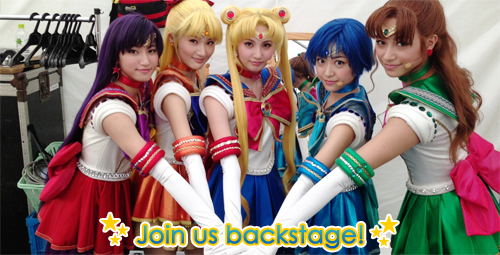 To start off the update, ainomessage has been hard at work with the new La Reconquista Cast and Staff Translations page. She has been translating tweets and blog posts by the actresses of the musical over the past few months on her tumblr, and has been gracious enough to compile these all in one place! These are fun reads, with lots of pictures as well! Definitely highly recommended, I’m sure y’all will enjoy them! 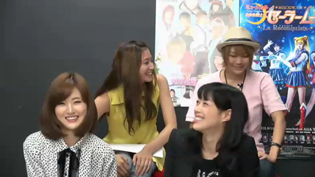 Another work she has finished was the most recent God of Backstage show which aired just after the start of the musical! This third installment includes the actresses for Tuxedo Mask, Sailors Mars and Venus, and Jadeite! This is done in the same vein as the previous installments, and this also includes reactions the ladies had from the first performances! It was mentioned how surprised they were to see a lot of foreigners there, and altogether a fun watch!

All of these have been added to our Sailor Moon: La Reconquista portal. For those of you who haven’t been to this page yet, outside of what was mentioned above and our translation of the musical itself, it contains more segments from the God of Backstage show, the (unofficial) soundtrack and lyrics, pamphlet translations, and much more. In the bottom of the page, there are two new flyers added. Thanks and credit goes to Pauline French for sharing these on our facebook page, allowing us to add these in our compilation page.

Keeping on track with the musicals, staff member P-chan has gone through and updated our Ultimate Sera Myu Guide with everything about Sailor Moon: La Reconquista. If you haven’t seen this page before, it’s a wonderful guide to all of the musicals. It is a great resource, and will get you excited for seeing all the others at some point, a number of which we have translated and posted online. We plan to add more of the Sailor Moon: La Reconquista streams, currently we only have access to two of the four performances and not all four as anticipated. So the proposed ultimate pack may be a touch less ultimate as initially planned. In any case, work is still being done to include as much as we possibly can!

Last but not least, we have a small addition to our special Naoko Takeuchi page. Thanks to ironlithium on tumblr, another artwork influence has been discovered, so it has been added with the rest! This page is also a wonderful source on anything Naoko Takeuchi including a timeline of her life and various pop culture influences to her work!

And that’s all for this weekend! We’re happy that y’all seemed to be enjoying Sailor Moon: La Reconquista along with the additional goodies on that page. If you haven’t, we highly recommend it. We’re always working on more projects for y’all’s enjoyment, so stay tuned! See you next time! =D